The Yankees were swept away by the Astros in the American League Championship Series and woke up Monday morning to the harsh reality that they have a lot of work to do this winter if they hope to close the significant gap with Houston.

General manager Brian Cashman’s biggest offseason priority is no secret: re-sign Aaron Judge to a long-term contract after the all-world right fielder just completed arguably the best offensive season in baseball history. Judge bet on himself by turning down the Yankees’ seven-year, $213.5 million offer in spring training and now stands to make approximately $100 million more in free agency. He will be the top position player in a special free-agent class. Will he be back?

Other key decisions await. Anthony Rizzo is expected to opt out of a $16 million player option for 2023, so first base needs to be addressed. The Yankees are expected to exercise right-hander Luis Severino’s $15 million team option, but will they look to further fortify the rotation? They will shed payroll in the bullpen next year with Aroldis Chapman, Zack Britton and Chad Green out of contract, but how do they bolster their diminished relief corps? Other impending free agents who are expected to depart include left fielder Andrew Benintendi and right-handed starter Jameson Taillon, though New York could try to re-sign one or both of them.

In addition, this offseason the Yankees must improve their traffic on the bases at the top of the lineup, clarify what they want to do on the left side of the field (third base, shortstop, left field), and find a closer who can dominate the ninth inning like Chapman once did.

Let’s look at each position, discuss the state of the organization and suggest some moves the Yankees could make this offseason to improve their team.

The rotation is pretty set for 2023 with ace Gerrit Cole, left-hander Nestor Cortes, Severino, Frankie Montas and Domingo Germán all under team control. The Yankees have other options, including Clarke Schmidt, but they could use more starting pitching depth, preferably another lefty. The soon-to-be free-agent southpaw who screams Yankees to me is Carlos Rodón, who had a banner season with San Francisco. As the cliché goes, you can never have too much starting pitching, and Rodón would be a game-changer for them. I estimate he’ll receive a four-year, $107 million deal on the market, so he would require a significant commitment from the Yankees. However, I think it’s more likely they put their financial resources toward re-signing Judge, addressing the back end of the bullpen and adding top-of-the-lineup players.

The Yankees’ biggest downfall this season was the rash of injuries in the bullpen, from Green to Britton to Michael King to Ron Marinaccio to Luis Gil, not to mention Chapman’s demise. The front office acquired midseason replacements, including Lou Trivino in a trade with Oakland and Scott Effross in a deal with the Cubs. Unfortunately for the Yankees, Effross, too, suffered an injury and underwent Tommy John surgery, which will keep him out for all of next season at least.

The Yankees have a solid bullpen, led by righties Clay Holmes and Jonathan Loáisiga, and lefties Wandy Peralta and Lucas Luetge, but they need an impact closer who can miss bats. Edwin Díaz, arguably the best in baseball matching that description, will be a free agent, and he’s a perfect fit for the Yankees (along with many other teams). Diaz converted 32 of 35 save opportunities, posted a 1.31 ERA and was worth 3.2 WAR, according to Baseball Reference. He’s proven he can handle the pressure of pitching in New York. With Chapman, Britton and Green off the books in 2023, the Yankees should have the means to pry Díaz away from the Mets. By my early estimate, it will take a four-year, $72 million contract to land him.

The Yankees have more questions than answers when it comes to how their infield will look next season.

They’d like to retain Rizzo, who hit 32 home runs, reached base at nearly a 34 percent clip and played well-above-average defense at first base. Rizzo holds a $16 million option and would like to return, but he should get a bump in salary. He is a great fit for New York, and the coming shift restrictions should help improve his batting average and on-base percentage, making him even more valuable.

Gleyber Torres looked a lot more comfortable this year after moving to second base from shortstop, and he delivered a 4.1 bWAR season with 24 home runs, 10 stolen bases and a 114 OPS+. At shortstop, the Yankees are committed to their talented youngsters, with Oswald Peraza the early front-runner to win the job in 2023, though it’s expected top prospect Anthony Volpe will eventually be the everyday shortstop, perhaps as early as late next summer. Third base is unsettled. One more guaranteed year remains on Josh Donaldson’s contract, but he’ll turn 37 in December and has declined to the point he’s no longer a starting player. DJ LeMahieu missed the postseason because of a foot injury, but he should recover this winter and I expect he’ll come to spring training as the starting third baseman.

Behind the scenes, the Yankees front office is telling people in the game that they don’t plan to be players in the top free-agent shortstop market, which is expected to include Carlos Correa, Xander Bogaerts, Trea Turner and Dansby Swanson. They say they’ll move forward with their young infielders, and that they prefer to spend their money on Judge, pitching and contact hitters. Bottom line: I won’t be surprised if the Yankees’ Opening Day infield is Rizzo at first, Torres at second, Peraza at short and LeMahieu at third. 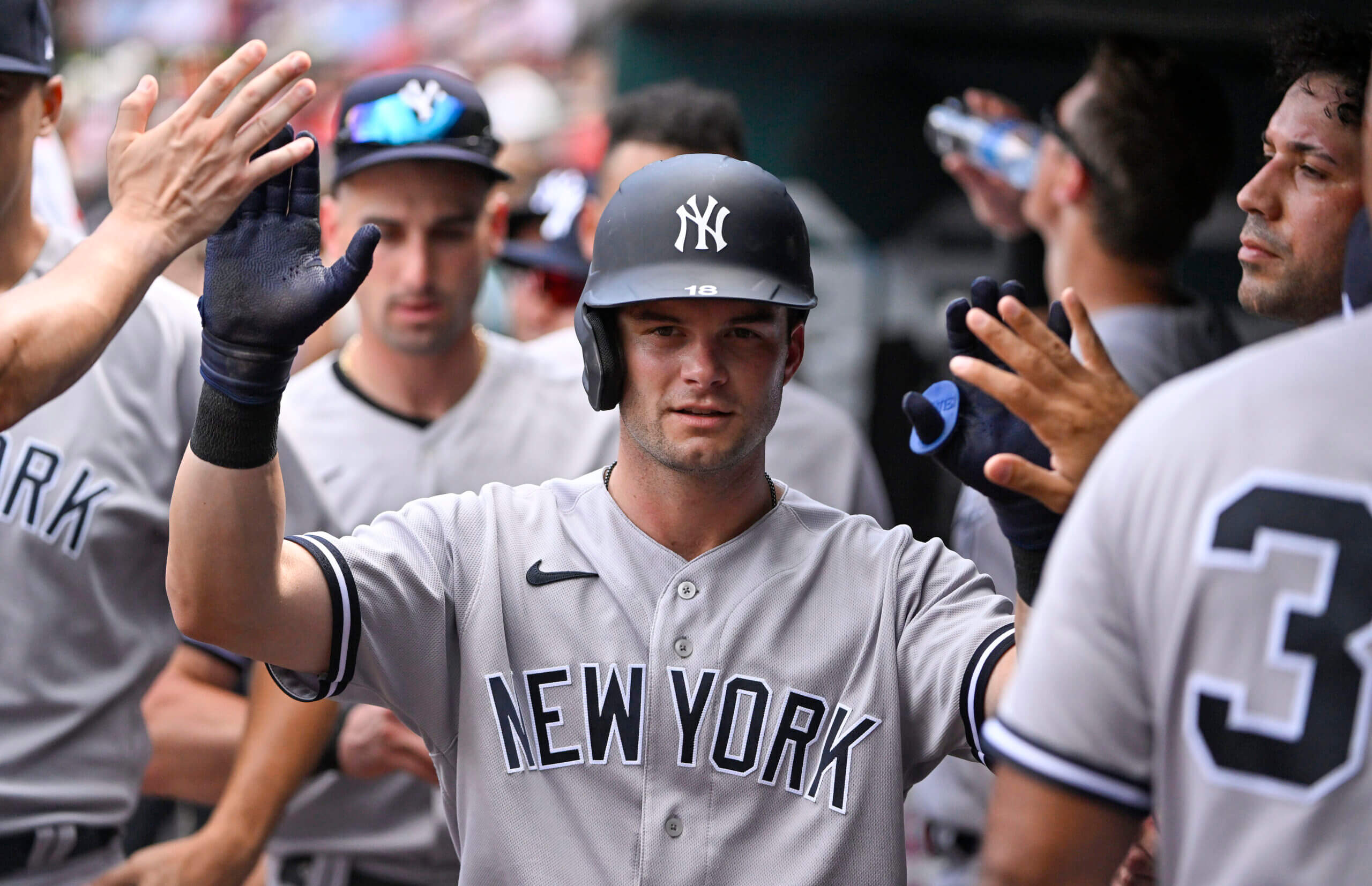 Beyond Judge, the biggest question in the starting lineup is what the Yankees will do in the left field. They like rookie Oswaldo Cabrera, who impressed during a 44-game stint this season, bringing a lot of energy and versatility to the lineup, but he might be best positioned as a super-utility player coming off the bench. The Yankees need to fill left field with a top-of-the-order hitter who can create traffic for their middle-of-the-order power bats. Trying to re-sign Benintendi makes a lot of sense as he beat .304 with a .373 OBP. His left-handed bat also would bring important balance to the Yankees’ lineup. Another possibility in left is soon-to-be free agent Brandon Nimmo, who was worth 5.0 bWAR this season with 16 home runs, a .367 OBP and a 130 OPS+. He played center field for the Mets but is better suited for left field. Nimmo is a left-handed hitter.

New York doesn’t have to worry about center field with Harrison Bader under team control through 2023. A Gold Glove defender, Bader put together an impressive postseason and has already become a fan favorite in the Bronx.

The Yankees are set at catcher with Jose Trevino and Kyle Higashioka under team control for three and two years, respectively. Trevino is arguably the best pitch-framer in the sport. He contributed on offense by hitting .248 with 11 home runs and made his first All-Star team. Higashioka hit .227 with 10 homers, but he beat nearly .300 in the second half of the season. Trevino and Higashioka are well respected by the Yankees’ pitchers, who rave about their ability to call a game.

Giancarlo Stanton will be the designated hitter as his $325 million contract, signed in 2014 with the Marlins, runs through 2027. He hit 31 homers this season while battling an Achilles injury but also posted a career-low 113 OPS+. Improved health and the shift restrictions should help Stanton put up better numbers next season.

For the Yankees fans dreaming of a trade for Shohei Ohtani … well, it’s not happening. However, if Ohtani becomes a free agent after the 2023 season, who knows? Stanton, if he’s healthy, could move to an outfield corner.

Catching up to the juggernaut Astros this winter is probably unrealistic for the Yankees. They have a ways to go, and re-singing Judge alone isn’t going to do it. Is there a path via checkbook baseball for the Yankees to take that type of leap this offseason — yes, but it would require something along the lines of re-upping Judge, signing Rodón (or another elite starter), inking Díaz, landing Turner ( or another star shortstop) and acquiring a left fielder for the top of the lineup who can provide traffic on the basepaths. But I don’t see all of that happening.

So, let’s regroup. Here’s my checklist for what the Yankees’ key offseason priorities should be:

1. Sign Judge to a long-term contract.
2. Pursue Díaz in free agency, bolster the back of the bullpen.
3. Pursue Rodon in free agency.
4. Target Benintendi or Nimmo in free agency to play left field.
5. Re-sign Rizzo to address first base.
6. Get the rest of the team healthy.

Yes, the Yankees have big areas to address this winter, but coming off a 99-win season and a trip to the ALCS, they also have a strong foundation to build on for 2023, if they can bring back Judge.